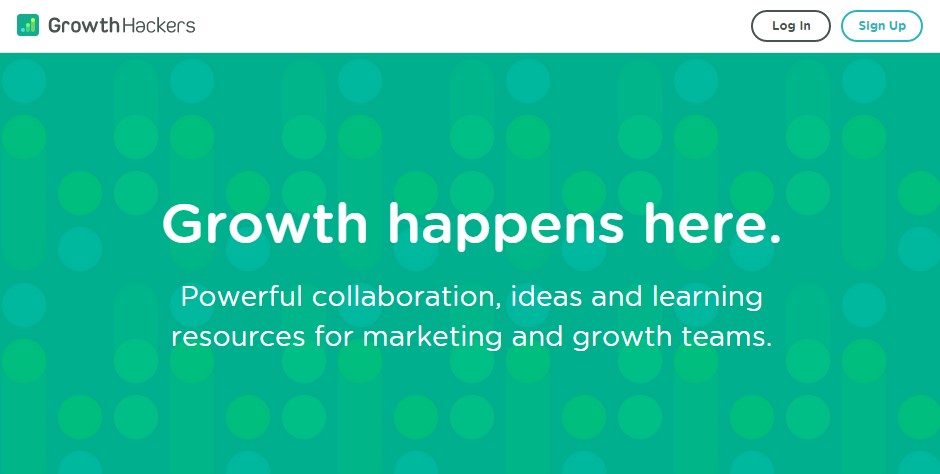 It’s often possible to learn an extraordinary amount just by recalling quotable phrases from influential people and applying them to your own projects. Let’s look at some standout examples of what growth hackers had to say last year.

“Rapid testing is the most effective way to predictably grow a business.”

This quote from Sean Ellis was from a case study where he explored the impact of high tempo testing when seeking growth opportunities. Mr. Ellis is the founder and CEO of GrowthHackers.com, and even coined the phrase “growth hacking.”

Interestingly, part of the inspiration behind his fast-paced testing methods comes from American football and the technique of “high tempo offense.” When a football team keeps up a fast pace from the moment of kickoff, the opposing team is often so bewildered that their defensive tactics slip.

After offering this explanation, Ellis went back to detailing his testing preferences. He said, “High tempo testing is approached with a similar energy and urgency to quickly uncover growth opportunities to exploit.”

“When you are in a rapid growth phase at the start of a new company, it’s incredibly valuable to be able to hack things together quickly yourself.”

This tidbit of acquired knowledge comes from Oli Gardner, co-founder of Unbounce. During an Ask Me Anything event, he discussed a belief that rapid growth is sometimes facilitated by not being reliant on others. He gave the example of having enough know-how to not have to rely on someone from the IT department every time a simple landing page must be built. That sounds like sage advice, especially since Gardner says he’s seen over 80 thousand landing pages in his career.

As a writer and entrepreneur, as well as an advisor and investor for tech startups, Andrew Chen is well-respected among growth hackers. While Chen was responding to questions during another online open forum, someone asked him to recommend books to read.

Although he provided a personally compiled book list, Chen noted, “Within a cutting edge industry like SaaS that’s always moving, there aren’t many books that are completely up-to-date with the newest stuff.

Ultimately you’ll have to talk to others who are doing good work in the field, go to events/conferences, and read all the same blogs we’re all reading. The feedback loop to get best practices from the industry into book form seems to take long enough, in most cases, that by the time it’s in a book it’s pretty obsolete or becomes super abstract/strategic/theoretical.”

This quote from Ann Smarty should give clarity if you’re focused on drastically boosting conversion rates for the year ahead. Ms. Smarty also published a relevant post with actionable strategies that discussed the tool and resources needed to automate marketing processes.

“One of the biggest mistakes is to use the number of [social media] followers as the most important metric.”

Have you been thinking of Instagram as a method to get the word out? If not, maybe you should, according to Austen Allred. By offering a worthy product and then determining the best ways to reach an audience, he helped a friend sell thousands of dollars worth of neckties in one day, just by using Instagram.

However, through the quote above, Allred cautions against simply trying to gain as many followers as possible. Since some people just decide to follow a social media account without taking further action, true engagement is actually more valuable than the number of followers alone.

“Just like entrepreneurs, growth hackers have to have grit.”

These words, written by Melinda Byerley, explain how, when taking a hypothesis-driven approach, failure is very common. To find success, growth hackers must persevere.

“Developers are so busy coding that that they often have little perspective on the real-world experiences of the customers using the product. A great growth hacker’s job is always bridging that gap.”

This is another quote from Sean Ellis, mentioned in the first quote on this list. His quote was driven by the idea that having customer empathy is essential for growth hacking efforts to work. The quote can be found in the article cited above, written by Melinda Byerley.

“One the biggest keys to accomplishing [impressive early growth] has involved working to create a market where, despite a handful of competitors, one really didn’t exist before.”

These words were taken from a case study written by Morgan Brown that explained why the Slack app was able to gain so much momentum early on. Understandably, the app also attracted attention from investors.

“[C]ompanies are willing to pay for [Slack’s] service. And that’s what the VCs are counting on.”

The Slack case study mentioned above also included this quote from Eugene Kim. Despite Slack’s billion-dollar valuation, Kim argued the app wasn’t able to generate revenue to justify it. However, he clarified that value is equivalent to perceived value — the amount that companies are willing to pay for something.

Oli Gardner on His Belief That Everyone Should Be a Writer

While answering questions during the previously mentioned period when Oli Gardner allowed people to submit questions, Gardener was asked if he would dive further into a personal belief that everyone should be a writer. Gardener said he thought writing publicly was better than writing things privately, and elaborated:

“Don’t be scared, be excited to share your knowledge, and know that your knowledge will grow exponentially if you put pen to paper. If you need a way to get started, I recommend writing 300 words — on absolutely anything — every morning before you do anything else. Do that for a month and you’re already 10 thousand words in. And there will be gold in there, or at least inspiration for what you should bring to the public.”

“Nail the product experience rather than worrying about little tactics [you] can use.”

After Andrew Chen agreed to share his insight with participants during an Ask Me Anything period, he capped the interview off by offering the quote above as a takeaway, geared towards people who are “working on pretty new products.” With this quote, Chen suggests products need to offer a streamlined user experience, not just look slick and different from what’s already out there.

You’ve already read about Melinda Byerley’s stance that growth hackers have to be prepared to encounter failure and keep going regardless. In the same article where she mentioned that mindset, Byerley also put forth an analogy derived from the days of the Gold Rush, comparing today’s growth hackers to miners and prospectors:

“[They] are a perfect match for the two most important company stages: startup and growth. Prospector growth hackers do best in early-stage companies that are still working to find perfect product-market fit and that don’t yet have their first big money invested. Miner growth hackers do best in post product-market fit conditions, when their skills are needed to excavate datasets in large and/or fast-growing businesses and find ways to turn those insights into even more growth. Put the wrong growth hacker in the wrong company, and disaster happens.”

Nicolo Ungari on How Empowerment Helped Etsy Rise to Excellence

Crafting marketplace Etsy has seen phenomenal success by making it easy for people to buy handmade items. Through it, you can even search for nearby crafters and get motivated to support the local economy. Nicolo Ungari believes the real secret behind Etsy’s success is that it gave crafters a capability they didn’t have before:

“What Etsy did so well was enabling individuals to be entrepreneurial with their hobbies. They created a virtuous cycle through several touchpoints, all directed towards helping the seller first.”

Ungari is helps with growth for a company called EatWith, which allows people to enjoy intimate dining experiences and foods directly in the respective chefs’ homes. Keeping that in mind, he arguably knows a thing or two about how today’s technological landscape makes it much easier than in past eras for people to turn passions into profits, especially with the right tools.

To some growth hackers, the idea of expanding organically may seem like an elusive goal. Ty Magnin sat down with Sean Ellis in 2015 and got him to reveal the framework required to allow organic growth:

“The basis of the framework is simple: Extract your product’s core value from its most passionate users. Then, use insights from those passionate users to shape the onboarding for future users. Assuming there is significant user passion to start with, those two things start a flywheel effect, resulting in massive organic growth.

By aligning your messaging and onboarding with insights collected from your “Must Have” users, you build momentum toward the unique benefit of your product. If, at the same time, you are able to reduce friction, you will maximize the percentage of users that reach the “Must Have” experience.”

“If you have a great product, nobody will ever sell it better than a happy customer.”

Lucas Emma was part of a team that acquired a Dutch product called Postcron, which was eventually used to break into new markets. Postcron’s users were particularly vocal about giving feedback. Reflecting on the discovery that thousands of users already posted reviews of Poscron online without being asked helped Emma describe the revelation that product feedback can be incredibly useful:

“We decided to allow — and incentivize — our customers to talk about our brand, through an amplification of what they were already doing organically,” she said. Users who had free accounts were given the opportunity to get a complimentary six-month premium subscription in exchange for reviewing Postcron. Eventually, word-of-mouth helped Postcron get noticed, which facilitated the expansion into other markets.

“Once you have people that love your product, then I think you need to concentrate on every other touch point to ensure you don’t turn that love off.”

The quotable gem above comes from Sean Ellis once again, this time during an Ask Me Anything segment. It was in response to the following question from a participant:

“Knowing that customers listen to their peers, what are some of your favorite above-and-beyond tactics to get customers to not only stay but become passionate promoters of your brand?“

Ellis followed up his previous statement by emphasizing, “Great customer support on top of a must-have product makes people want to spread the word.”

In 2015, growth hacking experts had memorable insight to give on matters ranging from product testing to the customer experience. Now that 2016 has started, it’ll be interesting to see what these influencers, and others, have to say about the details that drive product growth.