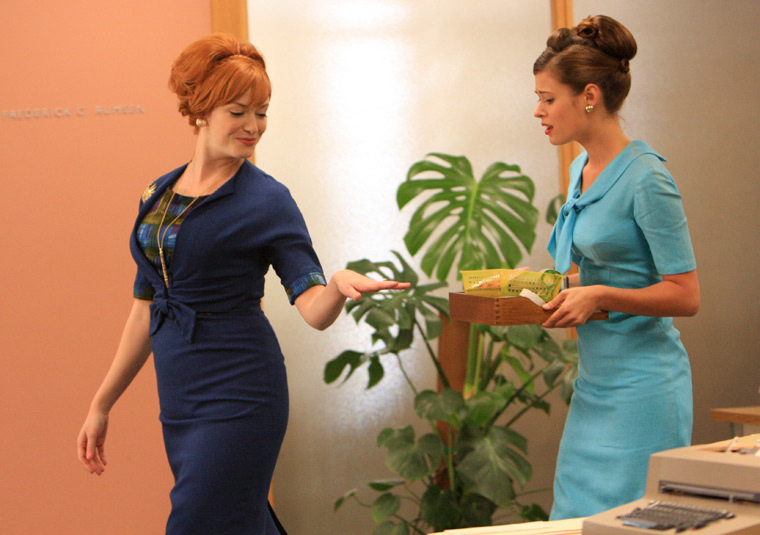 We return now to the world of “Mad Men” — this time to season four — to see what valuable business lessons we can glean from our intrepid advertising moguls. Don and his friends stay busy this season, so let’s see what we can learn.

Don Draper doesn’t mince words when it comes to taking risks or playing it safe: “You need to decide what kind of company you want to be. Comfortable and dead, or risky and possibly rich.”

Case in point: After Lucky Strike parts ways with SCDP, Don could have done the logical thing and pursued another major contract — another tobacco company, say — to fill the significant gap in their client roster. Instead, he did something unprecedented: He publically denounced tobacco products and advertisements in an open letter in The New York Times.

That’s a daring move, and it answers for good what kind of company Don wants to run — one that doesn’t take defeat lying down and that isn’t afraid to make some enemies in the pursuit of fresh new allies.

Pete Campbell is a case study in what it looks like to surrender to insecurity. Make no mistake — Campbell comes across as a blowhard and a self-righteous buffoon a lot of the time, but one gets the impression it’s a carefully cultivated persona that hides deep feelings of self-pity and even hatred.

In Season Four, Pete faces a major dilemma in the form of North American Aviation, a client he helped grow into a multi-million-dollar account. When NAA demands government background checks for key SCDP employees, Pete realizes Don’s true identity is about to come to light. So what’s a self-doubter to do?

Pete ends up canceling the NAA contract, in part to protect Don. It’s not a wholly selfless gesture, however — Don ends up paying Pete’s share of the collateral to keep SCDP afloat. Pete eventually returns to his wife to lament: “How is it that some people just walk through life, dragging their lies with them, destroying everything they touch?”

Pete did a noble (and perhaps foolish) thing in protecting Don, but instead of enjoying life on the high road, he surrenders once more to self-pity.

3. Give Your Clients Something They Don’t Know They Need

There have always been some uncanny similarities between the fictional Don Draper and the very real Steve Jobs. Apart from being demanding taskmasters, singularly focused on pursuing greatness, they also knew what it takes to really “wow” a client — and the world.

“How do you know that’s the truth? A new idea is something they don’t know yet, so of course it’s not gonna come up as an option. Put my campaign on TV for a year, then hold your group again. Maybe it’ll show up.” This was Don speaking about a focus group, defending his choice to throw convention to the wind and offer something truly different.

Likewise, Steve Jobs is on record saying he was motivated by the chance to show Apple customers something truly new and extraordinary: “Customers don’t know what they want until we’ve shown them.”

Is it hubris to imagine you know your clients’ minds better than they know themselves? Possibly. But, as in the first lesson above, nobody ever changed the world by playing it safe or bowing to tradition.

Although “Mad Men” frequently waxes philosophical about the value of getting in touch with one’s emotional core, at other times it warns against letting our emotions rule over us in a business setting.

Joan Harris has a tumultuous time of it this season, which culminates in an ill-advised, spur-of-the-moment backslide into bad habits when she has an emotional coupling with Roger in an alley. Their emotions were running high after being mugged at gunpoint, but Joan makes the mistake of letting her emotions best her — and with a coworker, no less.

The act results in some unwanted consequences later in the season, reminding us to remain in control of our faculties, particularly when our lives and livelihoods are in the mix.

As different as they are, Google, Apple and Microsoft all have one key thing in common: They cater to a variety of customers and needs. Granted, these are tech companies, and the tech world moves faster than most industries, but it’s a lesson that applies across the board: Businesses both large and small need a diverse collection of customers and clients.

Consider what happened when Lucky Strike canceled their contract with SCDP. The result was panic and potential financial ruin. The lesson here is to slowly build a roster of 20 or so smaller or medium-sized clients, rather than putting all of your proverbial eggs in one basket. Securing two or three huge accounts certainly sounds impressive, but you need to hedge your bets in case something unforeseen and unfortunate should happen.

If your biggest client up and leaves you for the sporty startup down the street, you’re going to be pretty happy you have that rolodex of 15 smaller clients to keep you afloat.

That’s a wrap for “Mad Men” Season Four. As always, the show proves as capable of handing down valuable business lessons as it is of gradually ramping up the tension to unbearable levels each season. Hopefully, you’ve learned as much from the experience as we have!